Many years ago I had the good fortune to be in town when my oldest son, Tim, and his wife, Autumn, were moving into their first home. There was a flurry of activity that day as her parents and I rushed around town with them, purchasing household items, picking up furniture, ordering appliances, and taking care of their two young boys. After we made our last stop (to pick up a mattress) we all separated to our different cars to drive to the house, my son heading to one car while Autumn and the babies went to another car and I headed to mine. Suddenly my daughter-in-law stopped in the middle of the parking lot.

“Honey Cute!” she called out to Tim, as though she had suddenly remembered something important.

Then she cocked her head flirtatiously and said with the sweetest smile, “Didn’t you want to kiss me?”

And of course, he did. His heart and his face melted as he strode across the parking lot to give her a big hug and kiss, and added a kiss for each of the boys. This was a happy day, the day they were moving into their first house with their little family. Autumn had indeed remembered something important.

Since then their family has grown to include four children, and whenever Tim leaves the house, his little girls turn it into a national tragedy. The youngest will follow his car down the street if she feels he hasn’t said enough goodbyes. Her meaning is clear: “Daddy—didn’t you want to kiss me? Again??”

With a happy father’s smile, he’ll pull the car to the side of the road to give her one more hug and send her back to the house. And my mother’s heart melts to see the father my son has become.

My younger son, Todd, and his wife, Lindsay, aren’t parents yet, but they will be in December. Todd has lived in our family home on a lake in central Florida almost his entire life. He loves being on his boat and has been a patient teacher when his nieces and nephews want to wakeboard, or help him make his famous grilled pizzas, or do tricks on the trampoline. Being an uncle has been great practice for the next phase of his life, when their baby daughter arrives and he rightfully claims Fathers Day as his own.

This past summer I learned something new about the evolving parent-child relationship as my son took us out to play on the lake. I had always been the mom who took my children and their friends on adventures. I introduced them to their first roller coasters, taught them how to catch a wave on a boogie board, drove the boat so they could wakeboard and ride the inner tube, took them to Orlando Magic basketball games, read stories in their classrooms and at bedtime, went on ski trips and traveled together, ached for them when they were hurt or upset, and glowed proudly when they succeeded. I cherished their childhood. “Slow down! You’re growing up too fast!” is the catch phrase of motherhood, and I said it often. As a mom, wherever I go, the ghosts of my young children come with me, reminding me of happy times together. How I miss those golden days!

But grow they did, and now Todd was the one taking us out kayaking on the lake. It started as a normal afternoon adventure. But I soon noticed something subtle and different as we set off. Todd settled me into the front of the double kayak, pushed us out into the lake, steered the craft, and kept me safe. He watched cautiously behind as his father guided his single kayak along the stream, and waited at the little rapids to make sure his father got through safely, (and then got out of our kayak to help him when he didn’t.) He praised me when I paddled correctly around the cypress roots, and dragged the kayak across a sandbar with me in it so I wouldn’t have to put my feet into the oozing muck and possibly fall. He was protective and careful, just as I had been all those years ago—and just as I had then, he was enjoying the adventure as much as we were. 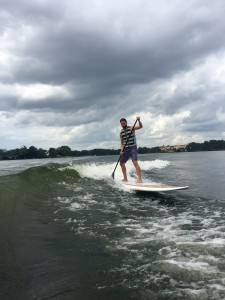 Later that day we went wake surfing, and Todd entertained us with his tricks. Then he brought out his old skurf board, the one with three fins for additional stability and easier control that he had used when he was learning. That one was for us. And it worked! I popped right up, found the sweet spot, and surfed behind the boat, with Todd and Mark shouting their approval and helping me improve. It was so much fun! Mark did great too, and Todd bragged to everyone about how well his dad had recovered when he started to fall behind the wave and fought to get back in front of it.

And suddenly I realized what had happened: Todd is now the “proud parent,” protective and encouraging. We’re now the “kids,” glowing with pleasure at his praise. My older son Tim acted the same way when we were hiking together in Bryce Canyon earlier this year, reaching for my hand when I needed a boost, offering to rest when he could tell I was winded, encouraging, praising, and enjoying the moment together.

I’ve noticed a new tenderness from my adult sons that wasn’t there before. They seem to realize that our time is growing short now. Every year we will become a little weaker, a little older, a little less able to use our bodies to do physical things. We’re aging, and I can almost hear their unspoken concern, echoing my own when they were younger: “Slow down! You’re going too fast!”

I thought again about how the ghosts of our children follow us as they age, reminding us of happy memories of the past. What I didn’t realize before was that the adult versions were there all along, learning how to be adults, ghosting us from the future, preparing for the time when they would be the protectors and guides. And they are just as wonderful in their roles as fathers as the children they once were.

Happy Fathers Day to my sons, and to you–no matter what role you happen to have today! 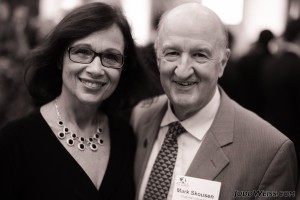 Jo Ann Skousen teaches English literature at Chapman University in California and Sing Sing Correctional Facility in New York. She is the entertainment editor for Liberty Magazine and the founding director of the Anthem Libertarian Film Festival. Her book Matriarchs of the Messiah: Valiant Women in the Lineage of Jesus Christ is available at matriarchsofthemessiah.com.