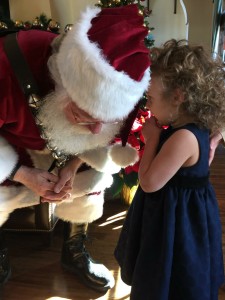 I was baking cookies one winter afternoon when Valerie, my not-quite-9-year-old, came to me with a serious look on her face. “Mommy,” she began, “none of my friends believe in Santa Claus.” Then, with the fervent testimony of faith, she continued, “But WE believe in Santa, don’t we!”

Her earnest declaration stopped me cold. Santa had been a very special visitor to our house since Valerie was a baby. I regaled my children all season long with stories “only I knew” about the right jolly old elf. I had visited Santa at his workshop at the North Pole when I was only seven years old. My mother had his personal phone number and forwarded all her grandchildren’s special requests directly to him. He invited his reindeer into our house while he delivered our presents, where they chomped on the carrots we offered them, leaving unusual teeth marks on the carrot stubs and hoof prints on the floor. He wrote elaborate notes in his curious penmanship and used his own wrapping paper that was different from the paper we used for our family gifting. I would point out this eye-popping evidence to them on Christmas morning and bask in their joy. Yes, I had done a remarkable job of helping my children believe in Santa Claus. I had been quite the convincing prevaricator. Which is just a fancy word for liar.

Around this same time, Valerie had begun to notice that many of her friends’ families did not believe in God. They did not attend any church, and they did not pray at meal time or bedtime when she visited their homes. I had spent many private moments with her that year, expressing my belief in our Heavenly Father and pointing out the many evidences of His love and creativity. Despite what others did or did not believe, WE believed in God. Her declaration now was unbearably close to those special shared moments of faith.

So I did the unthinkable. Point blank, on a cold, sunny December while baking cookies for Santa, I told my sweet earnest daughter the truth about Santa. The truth about my lies.

She was, of course, devastated.

From that day forward, Santa’s position in our home changed. No longer would I point out the evidence of Santa’s personal visits to our home, or the charming story about their Aunt Kathe and myself being lost in the woods and then rescued by Santa himself, who flew us to his workshop at the North Pole before returning us safely home. There would still be Christmas stories and visits to mall Santas with pictures taken on his lap. We would still leave cookies out on Christmas Eve, and hang our stockings on the mantel with care. But I made sure I always did this with a wink, and never with a declaration of truth. I would not be caught lying about something so significant as faith again.

Until another sunny December afternoon a dozen years later, when my youngest daughter, Hayley, then seven, was drawing pictures while I wrapped gifts in the family room. Hayley’s belief in Santa was strong, despite my winks to the contrary. It had developed naturally as she observed the season and felt the Christmas spirit. She had recognized the REAL Santa at a mall off the beaten track when she was just three years old, and insisted that I take her back to that nearly desolate mall each year. She had four consecutive photos with that same kindly old gentleman and his natural, curly beard to prove that he was real. Though I did nothing directly to encourage her belief, there was no question in her mind that Santa existed.

That particular afternoon I was wrapping gifts for a family in our congregation whose financial circumstances were meager. Our bishop had asked me to provide Christmas gifts for them, and I gladly accepted. In fact, I had spent several days in prayer and contemplation, asking for divine help to decide precisely which gifts I should select for this family of five. I had been guided to purchase some highly unusual items, including a lovely painting for their living room—totally impractical, and yet I knew that it was precisely what the mother of this family needed.

As I imagined the happiness of this sweet family when they opened their gifts, Hayley asked me a question from her drawing table. “How do you spell Kris Kringle?” She was drawing a picture of Santa, and wanted to title it. When I spelled K-R-I-S for her, she sighed in frustration. “Now I’ll have to start all over,” she said. I looked at her picture. Beneath the bearded gentleman were the letters “C-H-R-I-S.”

And there it was. On my seven-year-old daughter’s picture: The truth about Santa.

“No, no!” I told her. “Don’t start over! You spelled it exactly right. Santa’s name does start with CHRIS. Just add a T!”

How could I have missed it all those years? Of course we believed in Santa. We celebrated His birth every year.

The truth is, I am one of His elves. Every year He sends lists to His regional elf managers, including our own bishop and other ministers and leaders of charitable organizations. Every year these regional managers give assignments to the worldwide elf army. Every year, as a member of that elf army, I thoughtfully contemplate the prayers and wishes of good little (and not-so-little) boys and girls, often choosing gifts more carefully for those special children than I do for my own kids. And every year I come home from my secret deliveries filled with the spirit of Christmas and love.

I wish I had known this truth earlier. I would give anything to go back to that cold sunny December when Valerie was almost nine and add my own testimony to her fervent declaration, “WE believe in Santa, don’t we!”

Like Santa, God seems to enjoy a good surprise. Yes, He has to worry us sometimes, making us think we aren’t going to receive the relief or the opportunities we need, just as we often lead our children to believe they aren’t going to receive that special toy they want so desperately for Christmas. In fact, the better the gift, the more likely we are to make our children think it is impossible to have. Like Santa, God sometimes waits for just the right moment to bless us with a particular need or desire, even though it may mean allowing us to endure illness or worry or tribulation for a while—not just at Christmastime, but also in the dark hours throughout the year. I imagine He smiles gently to Himself with His knowledge of the greater gifts He has in store for us when the trial is over. And just as our children’s joy on Christmas morning is somehow greater for having worried that the gift would not arrive, our own joy when our trials end and the blessings are unveiled is all the sweeter for having passed through the trial itself.

As Jesus said, “Let not your heart be troubled…. In my father’s house are many mansions…. I go to prepare a place for you…If ye shall ask anything in my name, I will do it…. I will not leave you comfortless. I will come to you…. Because I live, ye shall live also.”

“God so loved the world that he gave his only begotten son, that whosover believeth in him should not perish, but have everlasting life.” What greater gift is there than this?

Jo Ann Skousen is the author of Matriarchs of the Messiah: Valiant Women in the Lineage of Jesus Christ, which offers a bold new look at the Biblical women who are Jesus’ direct ancestors. Available at Amazon, or an autographed copy, go to http://www.matriarchsofthemessiah.com/buy-the-book/

2 thoughts on “The Truth about Santa”