“Intreat me not to leave thee, or to return from following after thee: for whither thou goest, I will go; and where thou lodgest, I will lodge: thy people shall be my people, and thy God my God” (Ruth 1:16).

These poignant words spoken by a daughter-in-law to her grieving mother-in-law have secured for Ruth a place in the scriptures as the model of love and loyalty. But there is much more to this wonderful story. In fact, the story of Ruth is the story of redemption—the redemption of an entire people.

When Ruth chose to accompany Naomi back to Bethlehem after the death of her husband (Naomi’s son), she did so knowing that she would likely experience a lifetime of contempt and humiliation from the residents of her new home. That contempt was based on events that happened long before Ruth was born, stretching back to the very foundation of the Moabite people. Ruth’s ancestor Lot had chosen to “pitch his tent toward Sodom,” even though “the men of Sodom were wicked and sinners exceedingly” (Genesis 13:12-13). When messengers from God warned him that Sodom was about to be destroyed, Lot escaped with his wife and daughters and raced for the hills. But his wife turned back for one last lingering look at the city she had called home and “became a pillar of salt” as she faced the destruction (Genesis 19:26). According to legend, Lot then found refuge in a cave where his daughters, thinking they were the only three people left on earth after the catastrophic destruction they had just witnessed, plied their father with wine and then seduced him in order to perpetuate the race. The child of one of his daughters was Moab, father of the Moabites (Genesis 19:30-38). Thus Ruth traced her lineage back to an incestuous relationship that was humiliating and shameful to their distant cousins in Bethlehem.

The story of Ruth’s Moabite ancestors continued with their treachery toward the Israelites as they entered Canaan after wandering in the wilderness for forty years. The Moabites refused to sell bread and water to them, which bolstered the anger and resentment between the two tribes and led to the Deuteronomic injunction against Israelites marrying Moabites (see Deuteronomy 23:4-5).

Nevertheless, Ruth chose to accompany Naomi back to Bethlehem, where the expected sting of resentment was soothed by the healing balm of kindness expressed by every character in this story.[i] Naomi prayed that the Lord would “deal kindly” with her daughters-in-law because they had “dealt kindly” with her sons. Ruth sought grace as she went into the fields to glean, and she found that grace in the kindly gentleman Boaz, who was impressed by how considerately she had treated Naomi. Boaz continued to extend kindness to Ruth throughout the harvest season, causing Naomi to exclaim, “Blessed be he of the Lord, who hath not left off his kindness to the living and the dead.” 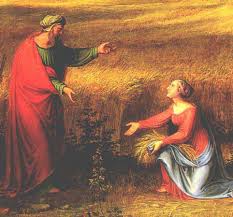 Boaz drew a connection between kindness and virtue when he said to Ruth, “Blessed be thou of the Lord, my daughter: for thou hast shewed more kindness in the latter end than at the beginning, inasmuch as thou followedst not young men, whether poor or rich.” In fact, he said, “all the city…know that thou art a virtuous woman,” because of Ruth’s reputation for kindness. Again and again the word is used, wiping away sorrow, wiping away hurt, wiping away sin.

Kindness shares the same root as the word kindred, for genuine acts of kindness lead naturally to a familial bond. Through sincere charity, which is the pure love of Jesus Christ, we join the family of Christ. When the Creator said “Let us make man in our own image,” he meant much more than physical appearance; He endowed humans with the power to become like Him in every way. To be like him is to be compassionate, generous, sacrificial, and wise. As Carolyn Custis James suggests, “The call to bear God’s image is an invitation to know God deeply.”[ii] This is the most important step in the process of redemption. All have sinned, but all are invited to turn away from sin, take God’s hand, and step onto the right path. His promise never falters: “His hand is stretched out still” (Isaiah 9:12). Through kindly acts we grow to love those whom we serve with a cheerful heart. Rebekah learned it. So did Leah. So did the Moabites and the Bethlehemites. So does everyone who bears the image of God.

When the kindly gentleman of Bethlehem redeemed the kind-hearted widow of Moab, an entire nation was redeemed. The Moabites had once refused bread and water to the Israelites, but three generations later they would succor the parents of King David of Israel and provide a safe haven for them (1 Samuel 22:3). Generations after that, Jesus Christ would offer Himself as a goel— a Hebrew word for “kinsman and redeemer”[iii]— who would give His own life as a ransom for all who have sinned. His body and his blood would become living bread and water that would not be withheld from the parched and thirsty lips; through them He would redeem all humankind from the Fall.

Truly “the Lord had visited his people in giving them bread” (Ruth 1:6). Through Ruth and Boaz, Moab would be reabsorbed into the larger family of the Israelites. Lot and his family would be redeemed and restored to their family line. Yes, Ruth was right when she said, “Thy God will be my God.” John MacArthur concludes, “Ruth is a fitting symbol of every believer, and even of the church itself—redeemed, brought into a position of great favor, endowed with riches and privilege, exalted to be the Redeemer’s own bride, and loved by Him with the profoundest affection….The extraordinary story of her redemption ought to make every true believer’s heart resonate with profound gladness and thanksgiving for the One who, likewise, has redeemed us from our sin.”[iv]

Read more about the women who are direct ancestors of Jesus Christ in Matriarchs of the Messiah: Valiant Women in the Lineage of Jesus Christ, but Jo Ann Skousen. Available at amazon.com and selected bookstores.