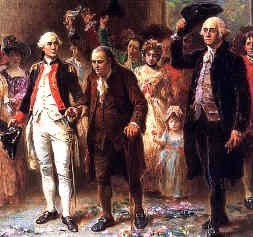 As the Constitutional Convention drew to a close, newly minted Americans waited anxiously outside Independence Hall to see what kind of government would emerge. Mrs. Powell of Philadelphia approached Benjamin Franklin and asked, “Well, Doctor, what have we got—a republic or a monarchy?” Franklin responded forcefully, “A republic—if you can keep it.”

“If you can keep it.” There’s the rub. We’ve managed to maintain our republic for 240 years, but it seems to stand on the brink of a new kind of monarchy, tainted with overbearing mandates and harboring no compunctions against invasions of individual liberty. It has ever been thus. The lure of power, pomp and largess has always stood in the shadows of monarchy, ready to trade a false promise of security and ease for hard-won liberty.

The Bible provides one of the most concise and accurate warnings ever written about the corrupting power of monarchy. In just nine short verses, the first book of Samuel describes what will happen when a king comes to power. I’ve thought about those verses a good deal during this Fourth of July, and indeed throughout this election season.

Here’s the biblical narrative: After wandering in the wilderness for forty years, the Israelites finally crossed the River Jordan into the land that had been promised to their tribal founder, Abraham. In the wilderness they had been given Ten Commandments—coincidentally, the same number as the Constitution’s Bill of Right—and these rules, like the Bill of Rights and Magna Carta before it, protected life, liberty and property. Moses set up a system of judges to hear and adjudicate complaints, and Joshua continued the judicial system after Moses died. It worked well. But soon the Israelites started looking around them at the kingdoms that surrounded them. They were drawn to the regality of it, the pomp and pride.

The crisis began when Samuel was judge in Israel, but his sons were found unfit to succeed him. They had “turned aside after lucre, and took bribes, and perverted judgment.” But instead of simply replacing the corrupt judges with honest judges, as had happened a generation earlier when Judge Eli’s sons proved unfit, the people said to Samuel, “make us a king to judge us like all the nations.” They wanted to be like everyone else.

An advantage of the regime of the judges had been that it was non-centralized, and more concerned with fairness and simple means of self-protection than with power or glory. Judging was, in fact, hard work. Monarchy, as God explained through Samuel, is a much more costly affair:

First, he said the king “will take your sons, and appoint them for himself, for his chariots, and to be his horsemen; and some shall run before his chariots.” In other words, he will conscript an army.

Next, “he will appoint him captains over thousands, and captains over fifties, and will set them to ear his ground, and to reap his harvest, and to make his instruments of war, and instruments of chariots.”We could call this bureaucracy, fascism or slavery, but forced labor by any other name is still as bleak.

Then “he will take your daughters to be confectionaries, and to be cooks, and to be bakers.” Ever an equal-opportunity enslaver, the king will conscript the daughters too—not unlike our own Senate, which recently voted to require women as well as men to register for the draft in the interest of “fairness to women.”

In addition, the king “will take the tenth of your seed” [an income tax] “and of your menservants, and your maidservants, and …your asses…and sheep [a wealth tax].”

And here’s the kicker about consequences: God concluded by saying, “And ye shall cry out in that day because of your king which ye shall have chosen you; and the Lord will not hear you in that day” (1 Samuel 8: 10-18).

Notice the reason God gives for leaving the people to suffer when they inevitably cry out for help: “the king which ye shall have chosen.” God respects choice, and he insists on accountability. Why do bad things happen? Because so many people make bad choices.

It is interesting that this warning did no good. “Nay, but we will have a king over us, that we also may be like all the nations [a kind of globalism],” the people said. The fact that ideas and choices have consequences can be unpleasant to consider. Much easier to follow one’s desires and find someone to help them–or to blame– later.

God was willing to help Samuel select a good man to become their king. Saul was a humble man who responded to the call by saying, “Am not I a Benjamite, of the smallest of the tribes of Israel? And my family the least of all the families of the tribe of Benjamin?” (1 Samuel 9:21). On the day of his coronation Saul was found “hiding among the stuff,” so overwhelmed was he by the thought of becoming king.

Nevertheless, as Lord Acton observed, “power tends to corrupt, and absolute power corrupts absolutely.” Soon King Saul became reckless, paranoid and churlish. God then selected another young man to become Saul’s successor—David, the youngest son of the shepherd Jesse. After David volunteered to face the giant Philistine Goliath and successfully killed him, the Israelites shouted, “Saul hath slain his thousands, and David his ten thousands!” From that moment Saul viewed David as a threat and usurper, and vowed to kill him. One of the costs of centralized power is the grim desire to get and keep it. 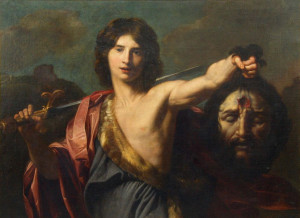 David was at first as pure and humble as Saul had been. He had been anointed to become Saul’s successor, but he was content to serve his king and wait patiently for the day it would happen. He tried mightily to convince Saul that he was not a threat. One day when he stumbled upon the murderous, scheming Saul sleeping in a cave, he cut off the skirt of Saul’s cloak to show that he had been close enough to Saul to have stabbed him in his sleep, but did not. He reasoned with Saul, saying,  “The Lord judge between me and thee, and the Lord avenge me of thee; but mine hand shall not be upon thee.” He vowed never to harm the king. Such was the honor and character of young David. 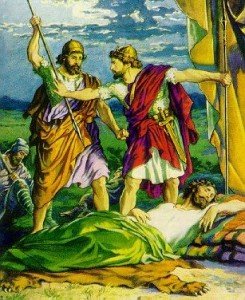 When Saul died in battle, David did become king, and the corrupting power of monarchy began to change him, just as God had predicted. Soon the once-humble shepherd boy conscripted armies and demanded food and supplies. When a “churlish” local landowner, Nabal, refused to give David;s army food and wine, David flew into a rage and threatened to kill all of Nabal’s servants and their families. Only the quick thinking of Abigail, Nabal’s wife, prevented the slaughter as she reminded David of how such a vile act would affect his reputation as king. Abigail’s wise argument brought David to his senses, and he thanked her. “Blessed be thy advice, …which hast kept me from coming to shed blood, and from avenging myself with mine own hand” (I Samuel 25). 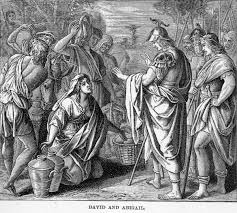 But David’s humility was short-lived. Soon he was standing on his palace balcony, filled with lust as he watched a woman, Bathsheba, bathing. With the power given to a king, he sent for her, slept with her, and when she became pregnant he arranged for her husband Uriah’s death by sending him to the battlefront and ordering his captain to leave him unprotected. This is what happens, often, when a man gets unchecked power; his sense of entitlement overpowers his sense of rightness. David would struggle for the rest of his life with the demands of war, and civil war with people who craved his power. He also struggled, often unsuccessfully, with his own impulses.  Power did not corrupt David absolutely, however, and he struggled throughout his adult life to escape its withering grasp. 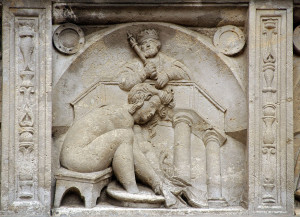 As we celebrate the 240th year of our nation’s independence, we have reason to be proud. The founders began a process of separation from monarchy that would provide an example for other nations around the world. Our Constitution became a model for other nations that would throw off the power of monarchy and turn monarchs into figureheads. The founders were not able to make all wrongs right—there were other civil rights still to be won. But they blazed a trail to freedom that others would follow in their own time.

Yet we must ever be vigilante against the corruption of power. The description of monarchy provided in 1 Samuel 8: 10-18 is still timely today, and it can describe presidents and dictators as well as kings. Indeed, many of us would be delighted if taxes stood only at the biblical 10%!

And there is another feature of those verses in 1 Samuel that should be emphasized. They picture God granting the people a choice. He warns of the natural consequences of certain actions, but then allows us to choose which path we will take. When bad choices are made, the existence of choice provides a path back. Let us hope that we, too, can find a path back to the liberties vouchsafed by our founding documents, as well as the respect for the rights of others encompassed within the Ten Commandments.

To learn more about David, Abigail and Bathsheba, read Matriarchs of the Messiah: Valiant Women in the Lineage of Jesus Christ, by Jo Ann Skousen, Chapman University.