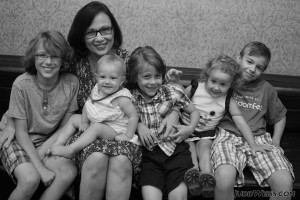 “Can a woman forget her sucking child, that she should not have compassion on the son of her womb? Yea, they may forget, yet will I not forget thee. Behold, I have graven thee upon the palms of my hands” (Isaiah 49:15-16)

The Bible is a story of families torn apart by jealousy, bitterness and sorrow, and brought together again through the healing power of forgiveness and devotion. It is a story of sibling rivalry, but also a story of siblings who made amends. We see examples throughout the Bible: As a boy, Ishmael teased and disrespected little Isaac, but as a man he remained close to Father Abraham, gave his daughter to his nephew Esau in marriage, and stood beside Isaac at the burial of their father. When Jacob used a cunning plot to secure the birthright blessing from Isaac, Esau vowed to kill him. Yet twenty years later, Esau embraced Jacob with a brother’s welcome. Jacob’s favorite son, Joseph, was so hated and resented by his older brothers that they sold him into slavery. Nevertheless, more than twenty years later, Joseph rescued those same treacherous brothers from famine and restored the love that should always exist among siblings.

Women stand firmly at the center of these stories, using their feminine strengths to encourage, support, plot and guide.

There is no single blueprint for womanhood or for motherhood. Each woman is an individual, motivated by her own hopes and talents, weaknesses and responsibilities. And each is an ezer, endowed by her Creator in the Garden of Eden with the innate power to become a rescuer and savior within her community. M. Russell Ballard wisely observed, “There is nothing in this world as personal, as nurturing, or as life changing as the influence of a righteous woman.”[1] This is true of women not only in their relationships as wives to their husbands and mothers to their children, but also as teachers to their students, neighbors to their friends, and leaders to their constituents.

Jesus is the Messiah and the King, yet He chose the tender mother-child relationship to demonstrate His devotion to His disciples. In Isaiah we read, “Can a woman forget her sucking child, that she should not have compassion on the son of her womb? Yea, they may forget, yet will I not forget thee. Behold, I have graven thee upon the palms of my hands” (Isaiah 49:15-16). First Isaiah acknowledges the absurdity that a nursing mother could forget her baby, and then he reminds us that Christ bears the imprints of His love within the nail prints of His sacrifice. He cannot forget us. We are part of Him.

A mother knows how completely in tune one person can be with another. I have a distinct memory of putting my firstborn baby into her crib one night and thinking, “She will be hungry in about three hours.” Such a small thing, yet it struck me in that moment that I was no longer a separate individual; I would always be connected to this child and acutely aware of her needs. As more children came into our home, my capacity to be constantly aware of them expanded. It was an invisible line connecting our spirits. I felt it with each birth. Perhaps it stems from the need to communicate soul to soul rather than with words in the first months and years of a child’s life. Fathers and mothers alike are willing to lay down their lives for their children, but “a mother, whose antennae are acutely attuned to her child, picks up signals that pass undetected by others.”[2] A mother is privileged to have that constant awareness, if she nurtures it. The connection is both spiritual and physical. We ache when we are away from our babies. The longer they are away from us, the more we ache. They are engraved in our stretch marks and in our hearts, just as we are engraved in the palms of Christ’s hands. Even when we stray, as we often do, “His anger is not turned away, but his hand is outstretched still” (Isaiah 9:8-12). A mother knows that feeling.

Jesus’s grandmothers knew that feeling too—as mothers, and as daughters. Like most of us, they experienced hardship, sacrifice, sorrow, and even sin, but by reaching for His outstretched hand, they also found great joy and spiritual peace. Their experiences and backgrounds were diverse, yet they have much in common with today’s women—and men, too—as we face obstacles, seek guidance, and make choices. From Sarah, for example, we learn that making the correct choice does not necessarily lead to an easier life. Giving Hagar to her husband as his second wife presented a heavy emotional burden that was almost too much for her to bear, even though it was the right thing to do. Her example of faith and obedience is exemplary. Sarah’s story shows us that it is normal and understandable to grieve for the path not taken, even when the Spirit has confirmed the correct path to take.

Similarly, Leah suffered the heartbreak of strained family relationships. The early years of her marriage were difficult, and the rivalry with her sister Rachel was bitter. Many of her children went astray. But as she nurtured her relationship with the Lord, the rift with her sister was mended, her children returned to the fold, and her marriage was strengthened. In the end, Jacob asked to be buried by Leah’s side. Her story gives hope to women today who are struggling with family problems.

Rebekah is often criticized for “tricking” her husband into giving the birthright blessing to her favorite son, Jacob, yet the messages of three separate but nearly identical revelations—one given to Rebekah, one to Isaac, and one to Jacob—confirmed that the blessing Isaac gave to Jacob was the correct one. Rebekah’s “trick” was an act of kindness as she gently guided her husband to make the right decision without telling him what to do. She respected and supported him in his role as the prophet, but she participated in their marriage as his partner.

Men and women today also face the dilemma of broken promises and lack of trust, especially in romantic relationships. Tamar demonstrated courage and persistence in the face of a broken promise, while rescuing the man who would become the founder of the tribe of Judah from his own lost way. Similarly, Rahab was a single woman walking a worldly path in a worldly city, but by trusting the Israelite men, she married into the tribe and became a noble and virtuous wife and mother. Bathsheba also shows that there is a way back for men and women who experience sexual sin. We don’t know whether she was seduced by David or was his willing partner. But we do know how she responded after the transgression: she mourned, she married the father of her child, and she built a strong relationship with him—so strong that she became his counselor and advisor as his queen. Through repentance she became a righteous mother whose son was known for his great wisdom.

Eve’s story, too, is relevant to modern women. She lived a peaceful, carefree life with her husband in the Garden of Eden. Adding children would change her lifestyle completely. Leaving the Garden would bring pain, toil and heartache. But it would also bring unspeakable joy. More than any other generation, modern women can relate to Eve’s quandary. Pharmaceutical birth control methods are so effective that women must actively choose when to give up the relative ease of couplehood to pursue pregnancy and children. Eve’s story acknowledges the risks and sacrifices inherent in choosing to become mothers, even as she led the way into mortality and parenthood.

In short,  Readers will find profound guidance by following the example of these valiant women in the lineage of Jesus Christ. Endowed by their Creator with feminine strengths, they had the audacity to change the world.

Excerpted from Matriarchs of the Messiah: Valiant Women in the Lineage of Jesus Christ by Jo Ann Skousen. Available at Costco, Amazon, and selected bookstores.