Symbols are an important aspect of religious worship, because they help us to express the inexpressible. We can draw nearer to our understanding of our relationship with God by saying what it’s like, especially when we don’t have the words to say what it is. Symbols play a significant role in the Passover seder, which will be celebrated by Jews (and remembered by many Christians) during Passover week.

Symbols of the Traditional Seder Plate: 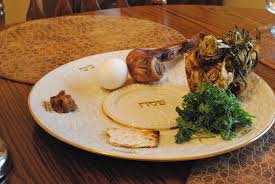 Karpas—a vegetable, usually celery, parsley, or boiled potato, dipped in salt water before eating to symbolize the salty tears of the Israelites.

Zeroah— the shank bone of a lamb, to symbolize the unblemished firstborn lamb that was sacrificed and roasted over a fire on the night of the first Passover.

Charoset—a sweet brown mixture of apples, nuts and spices to represent the mortar the Israelites used as they were forced to work and build for the Egyptians.

Beitzah—a roasted or hardboiled egg to represent mourning and the hard things we must often bear; hard boiled eggs are traditionally served at a funeral.

Maror—Bitter herbs, to represent the bitterness of slavery.

Matzah—a flat, yeastless bread that represents the unleavened bread eaten at the first Passover and the homelessness of their exodus through the desert.

The Haggadah is a parable or tale created as a guide throughout the seder celebration. Each part of the meal is accompanied by prayers and scripture readings. 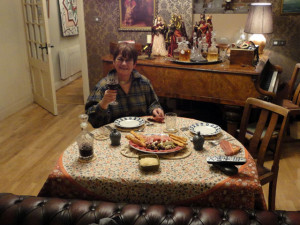 Elijah—Jews leave the front door ajar and set a place at the table as an invitation to the prophet Elijah, whose honor it is to restore the sealing power with which he was entrusted and herald the coming of the Messiah. 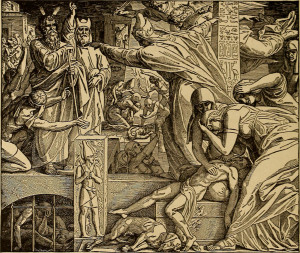 The story of the Passover is both wonderful and dreadful. After 430 years of bondage in Egypt, God was finally ready to lead them back to the land of Abraham’s covenant. But Pharaoh was not yet ready to let them go. Nine plagues had yet not convinced Pharaoh of God’s power. But the tenth plague would: The firstborn son of every household would die that night—including Pharaoh’s own household. Even the Israelites would suffer the plague, unless they obeyed the commandment to substitute a lamb “without blemish, a male of the first year….and take of the blood and strike it on the two side posts and on the upper door post of the houses, wherein they shall eat it” (Exodus 12:4-11). This simple demonstration of faith would allow the destroying angel to “pass over” the homes where the blood of the lambs had been smeared.

Additional instructions for that evening were just as precise. They were told to “eat the flesh in that night, roast with fire, and unleavened bread, and with bitter herbs…and let nothing of it remain until morning….And thus shall ye eat it: with your loins girded, your shoes on your feet, and your staff in your hand; and ye shall eat it in haste: it is the Lord’s Passover.”

All of these instructions reflect a sense of urgency and haste. There was no time to mix bread, knead it, and set it to rise; no time to let meat simmer in a crock pot; no time even to change clothing. These preparations remind us symbolically to be urgently engaged in the work of the Lord, to be prepared at all times for His coming, and to obey His commandments precisely. Such an easy, simple task, to smear blood on a door lintel. Yet how many would reject that commandment, or one like it, precisely because of its simplicity and possible embarrassment? 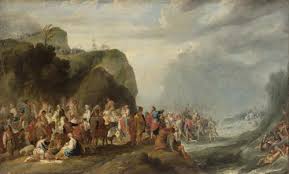 The symbol of “passing over” returns again and again in the story of the Bible. Moses led the Israelites as they passed over the Red Sea from Egypt into the desert, and Joshua led their descendants as they passed over the River Jordan into Jericho forty years later. There the harlot Rahab recognized the Spirit and power of God when she met the Israelite spies and protected them from the soldiers of Jericho. She too was given a simple task to perform as a symbol of her faith; when the Israelites returned to utterly destroy Jericho and everything in it, they promised to rescue Rahab and her family if she simply dangled a scarlet thread from the window of her home in the wall of the city.

This she did, trusting that they would keep their promise. It must have been with great relief—and with some fear—that she heard them call her name as the battle began and Jericho’s walls crumbled. Her neighbors would know of her treachery, and if the Israelites did not come for her, she would be killed. But they did remember their promise, and after the rescue Rahab joined with the Israelites and married Salmon. Their son Boaz would marry the lovely Moabite widow, Ruth, whose grandson David would become the greatest king of Israel—and an ancestor of Jesus Christ. 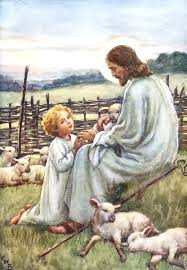 The most significant symbol in the Passover story is, of course, the Messiah Himself, Jesus Christ, whom Elijah has the privilege to announce. He is the paschal Lamb. He is the firstborn male without blemish, the only begotten Son of the Father, who gave His own life so that the destroying angel might pass over us. His crucifixion took place on Passover.

Our part—our privilege—is to accept His will and follow His commandments. It is as easy—and as difficult—as rubbing blood into the lentil of a doorway, or hanging a scarlet thread outside a window, or stepping into the raging river with confidence that the waters will be stopped. May we all have our loins girded, our shoes on our feet, and our staff in our hands, when that moment comes.

You can learn more about Rahab and the other women who are direct ancestors of Jesus Christ in Matriarchs of the Messiah: Valiant Women in the Lineage of Jesus Christ by Jo Ann Skousen. Available at Costco, Amazon.com and selected bookstores.