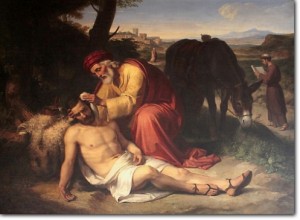 The Bible is filled with allegories that point toward the mission of the Messiah. For example, we see the Crucifixion foreshadowed within the story of Abraham’s willingness to sacrifice his beloved son Isaac. In that heart-wrenching allegory, Abraham represents God, Isaac represents Christ, and the angel who arrives to stop the raised hand of Abraham is the Holy Ghost (see Genesis 22).

John W. Welch discovered a similar allegory of the Savior’s mission in the parable of the Good Samaritan. In this story a man “went down from Jerusalem to Jericho, and fell among thieves” (Luke 10:30). A priest and a Levite passed by the wounded man “on the other side,” indicating allegorically that neither the church nor the law could save the man. Only the Samaritan “had compassion on him, and went to him, and bound up his wounds, pouring in oil and wine, and . . . brought him to an inn, and took care of him” (Luke 10:32–34). Before leaving, the Samaritan gave the innkeeper “two pence” and said, “Whatsoever thou spendest more, when I come again, I will repay thee” (Luke 10:35).

The Parable of the Good Samaritan is a powerful story that inspires readers to develop compassion and offer service to strangers. But it is also a powerful allegory. As Welch explains, Jerusalem represents heaven, Jericho represents the world, the thieves represent worldly corruption, and the man represents each of us. The oil used by the Samaritan to soothe the man’s wounds is a symbol of Christ’s priesthood, and the purifying wine is a symbol of His atoning blood. A penny was the price of a day’s labor at that time, so the “two pence” and the day the Samaritan spent with the man represent Christ’s time in the tomb, while the Samaritan’s promise to repay “whatsoever thou spendest more” represents His infinite Atonement (see Luke 10:32–35). Nestled within these eight verses about the selfless Samaritan we find the entire plan of salvation.

I have found a similar allegory of Christ’s mission in the short epistle to Philemon that Paul wrote to Philemon from his prison cell in Rome. Modern Christians often feel uncomfortable about this short letter because it seems to support slavery, but a closer reading reveals a more profound meaning. In it Paul beseeches Philemon to “receive . . . for ever” the runaway servant Onesimus, but he uses the unexpected phrase, “for love’s sake,” indicating there is more to the story than a labor or property dispute.

Onesimus had gone from Philemon’s service to Rome (like Jericho, a symbol of the world), where he met Paul and was transformed from a man “in times past . . . unprofitable, but now profitable” to Philemon. Paul asks Philemon to receive Onesimus not as a slave but as “a brother beloved” and promises, “If he hath wronged thee, put that on mine account; . . . I will repay it.”

In this surprising allegory, Onesimus represents each of us “departed for a season” from the love of God but redeemed by the infinite Atonement of the Savior. Philemon, whose very name means Love, represents God in this story. All of us are His servants, “in times past unprofitable,” but “made profitable” through the saving grace of Jesus Christ. And, like the Samaritan, Paul is the Christ figure in this story, pleading the case of a sinner and offering to pay his debts in full. Once again we find the entire plan of salvation hidden within a small epistle that is often overlooked or misunderstood.

Similarly, the story of Rebekah is an allegory of the day when the Messiah will return in all His glory to redeem the world. Eliezer, whose name suggests that he is not an ordinary servant but an ezer, or “Godly helper,” is more than a messenger sent to Haran by Abraham to find a righteous bride for Isaac; he represents the Holy Ghost sent to earth by God the Father to seek out the righteous “bride of Christ”—the members of His church. Allegorically Isaac represents the resurrected Messiah, and Rebekah represents each of us—clothed, as we can be, in “the glorious mantle He has given her, the robe of His own perfect righteousness” (James Neil, Everyday Life in the Holy Land (London: Cassel and Co., 1913, 259-60).

Scattered throughout the scriptures, these allegories resonate deeply within us, subtly reminding us of the mission of the Messiah to redeem His people and bring the safely home to God, whose name, like Philemon’s, is Love (1 John 4:8).

To learn more about the fascinating allegories found in the Bible, read Matriarchs of the Messiah: Valiant Women in the Lineage of Jesus Christ, by Jo Ann Skousen. Available at amazon.com and selected bookstores.